The garden was opened on April 18th 2008 by The Mayor of Hertford, 60 years after the land was given to the citizens of Hertford by Mrs Trower of Bengeo Hall. 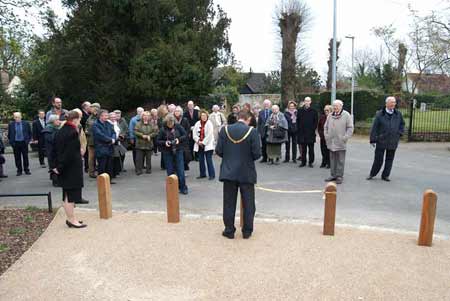 In the interim the land had been worked as allotments, and in 2002 Elspeth Kemp was advised that she might be able to claim possession of the land to ensure that it would remain an open space to be enjoyed by local people in accordance with the original terms of Mrs Trower’s gift.

After lengthy discussions with East Herts District Council and the Diocese of St Albans, with input from the Civic Society and the Bengeo PCC, East Herts Council and the Town Council agreed to create and maintain a community garden to replace the allotment.

The land was entrusted to the borough of Hertford by the Hon Mrs W G Trower of Bengeo Hall in 1948 as an open space without any form of hut or building on it for the benefit of the citizens of Hertford.

However, the original terms of the gift were to be largely ignored for 60 years. In 1950, Mr Christopher Savory, who had succeeded the Trower family at Bengeo Hall, offered to take responsibility for the land which was to be fenced and worked as allotments by the inhabitants of neighbouring properties.

It was thus that Elspeth and Albert Kemp, whose cottage abuts the land, were invited to work part of the plot many years ago and continued to do so until the recent creation of the garden. In the meantime, Mr Savory had died and the future of this forgotten parcel of land became increasingly uncertain in times when property developers were looking to increase their portfolios of land suitable for building.

In 2002, Elspeth, a committee member of the Friends of St Leonard's, was advised that she had sound legal grounds for claiming possession of her plot and was therefore in a strong position to ensure its long term preservation as an open space in accordance with the original terms of the gift. She had long been concerned that this land might be vulnerable to development and was passionate in her desire to preserve for posterity the immediate surroundings of the ancient church, an objective she pursued regardless of personal expense and expenditure of time and effort.

It was only after protracted negotiations between East Herts Council, the Diocese of St Albans and herself, with some input from the Civic Society and the Bengeo PCC, that the happy solution which has now come to fruition was agreed in which the EHC would create a community garden to replace the allotments.

The sweeping curve of a path leads in an arc from the kissing gate, whose restoration by Richard Maynard of The Forge at Much Hadham was sponsored by the Civic Society.This curve is bisected by the line of the main path which directs the eye to the gateway of St Leonard's Church. The flower beds were planted with a pleasing variety of trees, shrubs and herbaceous plants by D Honour and Son of Stansted.

The overall effect has been not only to preserve and enhance the setting of the ancient church but also to help recreate the feeling of a village centre in the area which used to be known as Bengeo Church End and which historically formed the heart of the community.

The Town Council has now taken responsibility for maintenance of the garden which has been the subject of much favourable comment by members of the general public. It is surely pleasing to reflect that after all these years the wishes of the original benefactors have at last been honoured in such beautiful fashion.