The Deposition from the Cross

This very early Medieval, probably 13th century, painting has something of the quality of an icon in which the artist presents a holy image to help us in our devotions. 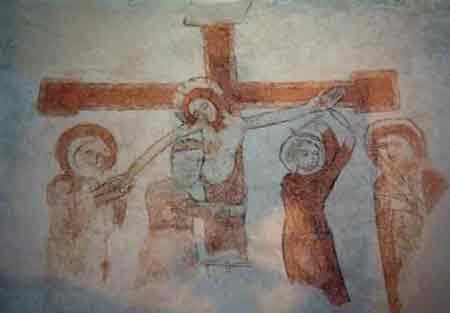 Here the disciples lift down the body of Christ from the cross prior to its burial in the tomb belonging to Joseph of Arimathea.

Set against a plain background, the participants in the drama appear isolated in their grief. Yet at the same time, there is an overall impression of serenity in the depiction of our Lord’s body about to be gently lowered to the rocky outcrop of Golgotha which the artist outlines at the foot of the painting. At the top of the cross is a panel which originally read I.N.R.I., short for Iesus Nazarenus Rex Iudaeorum (Jesus of Nazareth, the King of the Jews). The golden halo encircling the head of Jesus contains 3 bars recalling the Holy Trinity.

To the left of the group, we see the Blessed Virgin Mary clasping the right hand of our Lord. She stands calm and collected but appears lost in thought as she regains physical contact with her Son. Other paintings of the same period make much of the fact that his body was returned to the mother who had so often held him in her arms. Joseph of Arimathea, a wealthy Jew, had been a secret follower of Jesus but he had now found the courage to ask Pilate for the body. As he was never canonised, he simply wears a flat Jewish cap without a halo. With his head pressed against our Lord’s chest as he prepares to take the weight, he creates the impression of a loving embrace.

The female figure to the right of the cross is almost certainly Mary Magdalene. She holds aloft 2 of the instruments of the Passion, a nail and pliers, which point to the wound in the palm of our Lord’s hand. The mysterious bearded figure on the extreme right occupies a position traditionally assigned to John, the beloved disciple. Certainly he is given a halo, but John is generally depicted as clean shaven. More probably the figure is that of Nicodemus, the lawyer, who visited Jesus by night and was present at the Crucifixion. He wears a look of bewilderment at the turn of events. His left hand is shown in two positions, stroking his beard in puzzlement and directing our gaze to the drama that is unfolding.

The composition invites us to contemplate a tragic scene but one invested with dignity, a moment of calm poised between the horror of Good Friday and the joy of Easter.