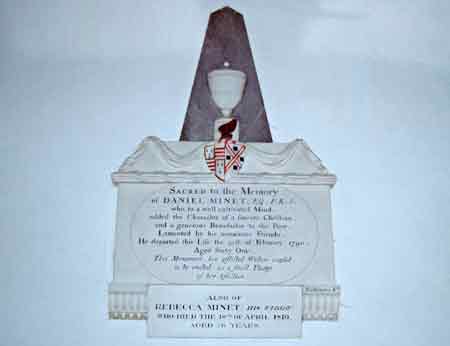 The neoclassical memorial in white marble on the North wall is by Joseph Nollekins, the finest British sculptor of the late 18th century. 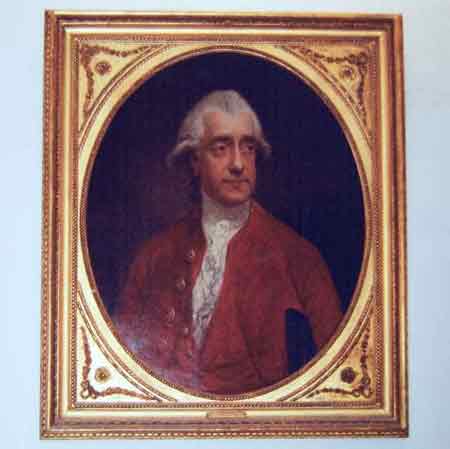 Nollekins was the son of an artist in Antwerp and when he set up his studio in London, his work was so highly regarded, he included King George 111, Charles James Fox and William Pitt, the younger, among his sitters. Today a number of his works are displayed in the Victoria and Albert museum in South Kensington. 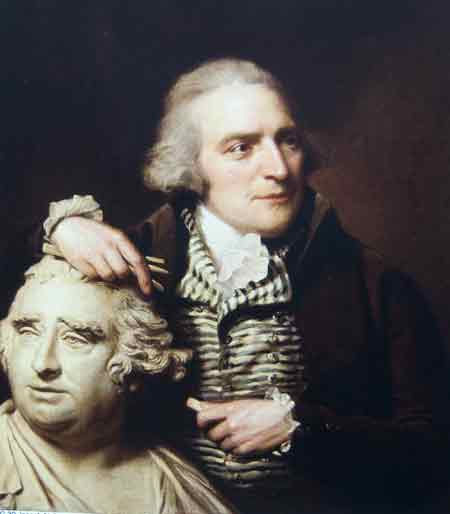 Reproduced by courtesy of the Society of Antiquaries.

Daniel Minet was a member of a distinguished Huguenot family who were refugees from persecution in France after the Revocation of the Edict of Nantes in 1685. As a young man, his grandfather Isaac had escaped across the Channel in a rowing boat and had gone on to make his fortune in a successful business career.

Daniel studied law at the Inner Temple, became Surveyor of Customs and a distinguished man of letters specialising in archaeology, a study at that time in its infancy. He was a member of the Society of Antiquaries and of the Royal Society and the fact that both he and his wife had their portraits painted by Gainsborough is an indication of the family's status in London society.

The family seat subsequently became Hadham Hall near Bishops Stortford where they lived until 1949.

The Paintings – Moses and Aaron

The arresting pair of oil paintings on the West wall date from the 18th century. They depict the commanding figures of Moses and his brother, Aaron, who together led the Israelites from their captivity in Egypt through the desert to the Promised Land. Moses bears the tablets of the Law known as the Ten Commandments while Aaron wears his priestly vestments and holds a censer in one hand and in the other his famous staff which according to the Biblical narrative sprouted with almond blossom. 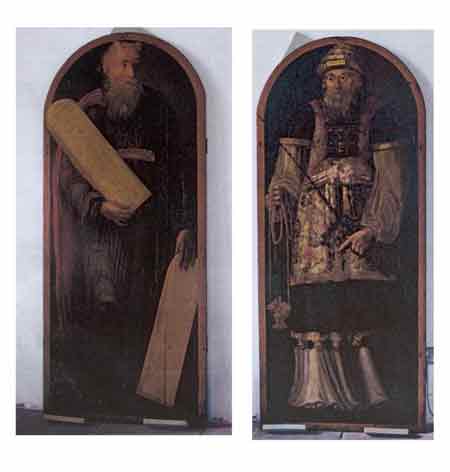 The paintings by an unknown artist originally hung behind the altar on either side of the east window whose shape they replicate. In Christian tradition, both leaders are seen as prefiguring Christ and their depiction was much favoured in the 18th century as representing the twofold tenets of our faith: the Word and the Sacraments.

The Royal Coat of Arms 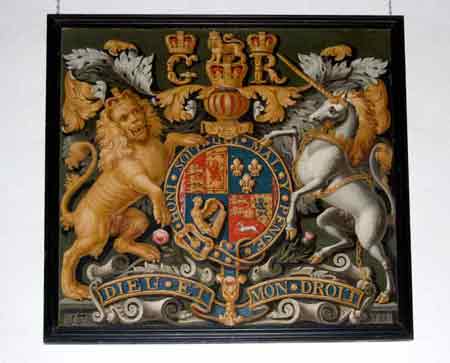 The Royal Coat of Arms on the North wall is that of George I and is dated 1719. It differs significantly from the royal Arms adopted by Queen Victoria which remains unchanged to this day. While the first quarter contains the familiar lions of England, the second with its fleur de lys reminds us of the historic claim of the British Crown to the French throne. The third quarter contains the harp of Ireland while the famous white horse of Hanover is prominent in the fourth quarter.

The coat of arms was probably originally sited above the chancel arch and would have reminded parishioners that the monarch had been anointed at his coronation and bore the title Defender of the Faith. 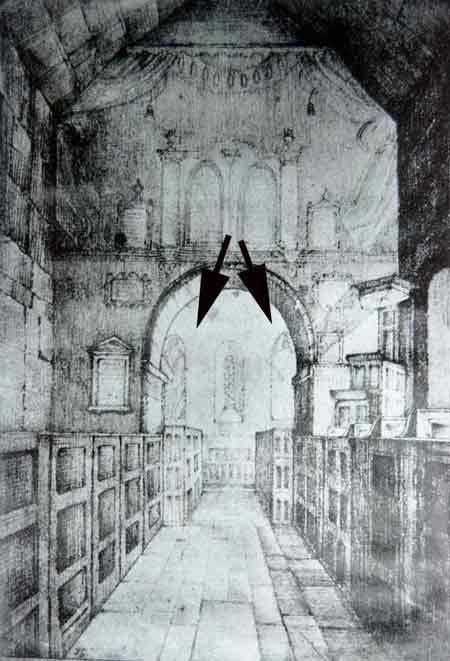 This view of the nave shows us how differently the church appeared with its 18th century furnishings. High box pews would have ensured that the congregation could be accommodated according to their social status with that of the Hall family from the Palladian mansion at Goldings occupying place of honour nearest both the altar and their family vault and monument. To the right of the chancel arch, there is a three-decker pulpit with prayer-desk, lectern and pulpit combined in one. The wall above the chancel arch is decorated with an ornate baroque decorative scheme featuring classical motifs and flowing swags incorporating texts such as the crede. On either side of the East window, the paintings of Moses and Aaron are in their original position. Wooden boarding conceals the roof timbers of the nave and adds to the overall effect which to modern eyes appears to reduce both the sense of space and of the building's antiquity. 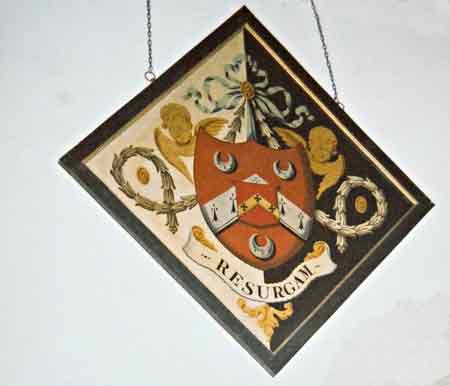 Invariably diamond-shaped, hatchments were introduced into this country from Holland in the early 17th century. Painted on canvas, they were used to proclaim a death in a landed or titled family. They were emblazoned with the heraldic arms of the deceased and carried in procession at the funeral. They were then generally hung from the house front for a year before being placed in the parish church. This widespread practice began to fall into decline in the 1860s and most of the hatchments which once adorned our churches have long since perished. St Leonard’s is fortunate in retaining three fine examples. 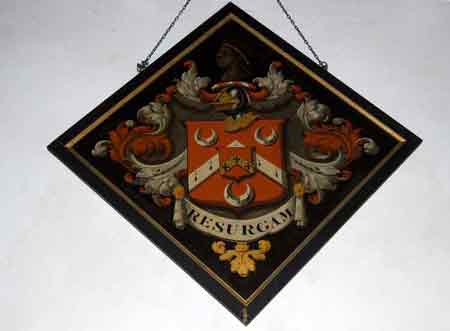 The pair hanging on the South wall commemorate Admiral Thomas le Marchant Gosselin and his wife Sarah of Bengeo Hall. The admiral who was a national hero of the Napoleonic Wars outlived his wife by no less than 42 years. Both hatchments present the same shield but whereas Sarah's is suspended by ribbons tied in love knots, her husband's is surmounted by a crest and the striking head of an African wearing a gold earring. The fact that half the background of Sarah's hatchment is coloured white tells us that she died before her husband. 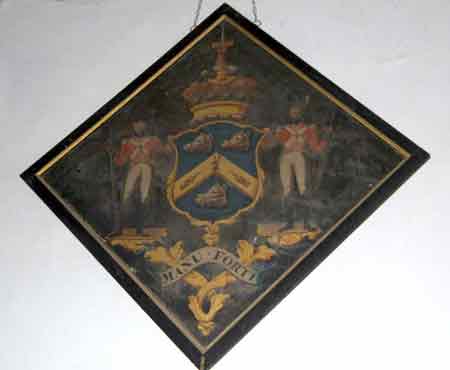 The third hatchment hangs on the North wall and commemorates Sir Eric Mackay, 7th Baron Reay, a member of one of Scotland's distinguished clans. He was a Scottish representative peer and died at Goldings which he was leasing from the Abel Smith family. The supporters are two soldiers wearing the colourful uniforms of the time. Each holds a musket armed with a bayonet in their outside hand. Above the shield, the coronet reminds us that Sir Eric was a baron.